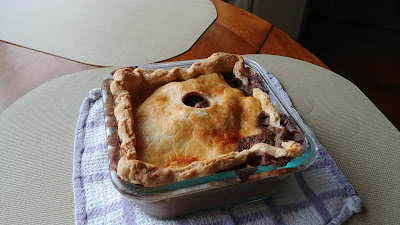 I bookmarked this Pub-Style Steak & Ale Pie recipe from the March/April 2017 Cook's Illustrated nearly 3 years ago. I really liked the pub pies we ate in London and wanted to try making one at home. We finally gave it a try. 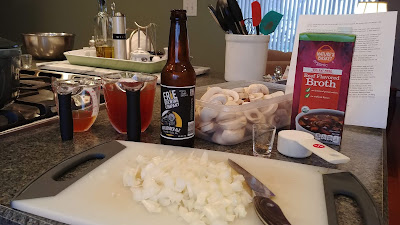 It tuned out to be more work and more time consuming than we expected. I was in charge of mise en place for the filling. SP made and rolled the crust. He also did the cooking on top the stove since I cannot reach. 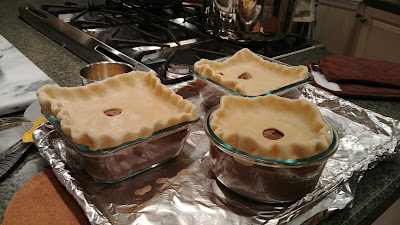 Ready to go in the oven. Instead of one large 9" deep dish pie, we made three smaller servings since we wanted 3 dinners. We made extra dough to make sure we had enough crust. 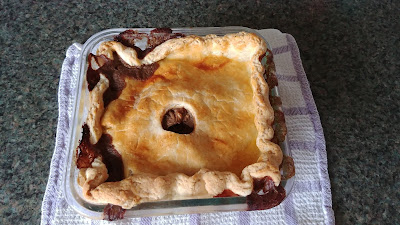 Baked pie. The crust sank down into the filling and the filling bubbled up over the crust and down the sides of the glass dishes. 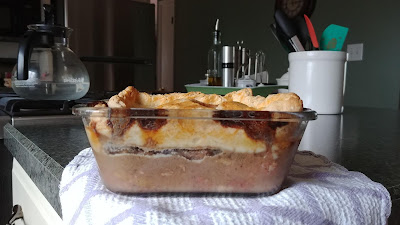 The crust sinking down into the filling means our crust didn't completely bake. The parts touching the filling remained uncooked while the top got nice and golden brown. It looked like we had it crimped and sealed well, but turns out, nope, we did not. 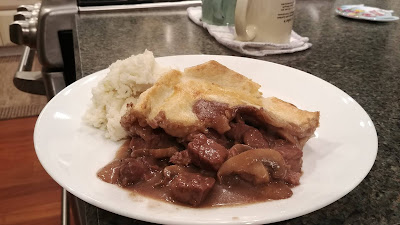 This dish is only a partial success for us. I already mentioned the raw/uncooked crust bits. The liquid is ultimately supposed to simmer and become thick enough to thoroughly coat the beef. Our liquid never seemed to reduce/thicken enough. We think it was much soupier than it was supposed to be. We even simmered it about 30 minutes longer than the recipe says. Then we baked the entire pie for about 30 minutes longer than the recipe says and the crust was not all that golden brown. At 8 pm, we decided it was time to eat. We ate one of the three pies and left the other two in the oven for another 30 minutes!

Days 2 & 3 were tastier than Day 1. The crust was more thoroughly cooked and the gravy had thickened up more (I guess from cooling & reheating). The beef was tender and pulled apart easily with a fork. The gravy was delicious. Lots of yummy bacon flavor. The crust was delicious, especially on the two that baked longer. I picked off the uncooked parts. I'm glad we used extra mushrooms because they were yummy. The bacon is not supposed to be crisped and browned but we both felt it remained too "soft" and next time would crisp it.

I'm not sure we'd make this again. The meat was pricey. While we chose to make a beef dish, we don't usually eat a lot of beef, so we both felt this dish was too beef-filled for us. It was a lot of beef in one serving, much more than a hamburger or sloppy joe or meatloaf (our usual beef meals). It also took several hours and it still wasn't done! It was a huge chunk of time and with everything else we usually need to accomplish on Sundays, we just don't have the luxury of that much time for one meal.